In 2020, Delta Holding continued to invest in irrigation systems and increased the area of arable land under the irrigation, planning to continue with the said activities in the following years.

For years, Delta Agrar has been investing in the latest irrigation systems which optimize water consumption, i.e. precisely determine the amount of water necessary for uninhibited growth and development of plants. The Company relies on surveys on the yield of water wells and installs water meters with the aim of optimizing water consumption at all locations. The quality of the water in wells is controlled on a monthly basis and the reports on the consumption are regularly submitted to the public water management company “Srbijavode”. In addition, precision agriculture facilitates monitoring and optimization of water consumption for production needs.

To irrigate orchards, vegetable gardens, and arable crops, Delta Agrar uses the latest irrigation systems drop-by-drop, which regulate and optimize consumption. These watering systems rely on automatic monitoring to adapt to plants’ needs. The drinkers used on farms prevent spilling and excess consumption of drinking water. To optimize the level of water exploitation, the quantity of distributed water does not exceed the irrigation norm, as the plants absorb only the amount of water that is necessary for growth and development of biomass, whereas the rest is lost through evaporation and drainage. Besides the norm, irrigation timing is one of the most important elements, as well as the choice of droppers that uniformly distribute water to plants. 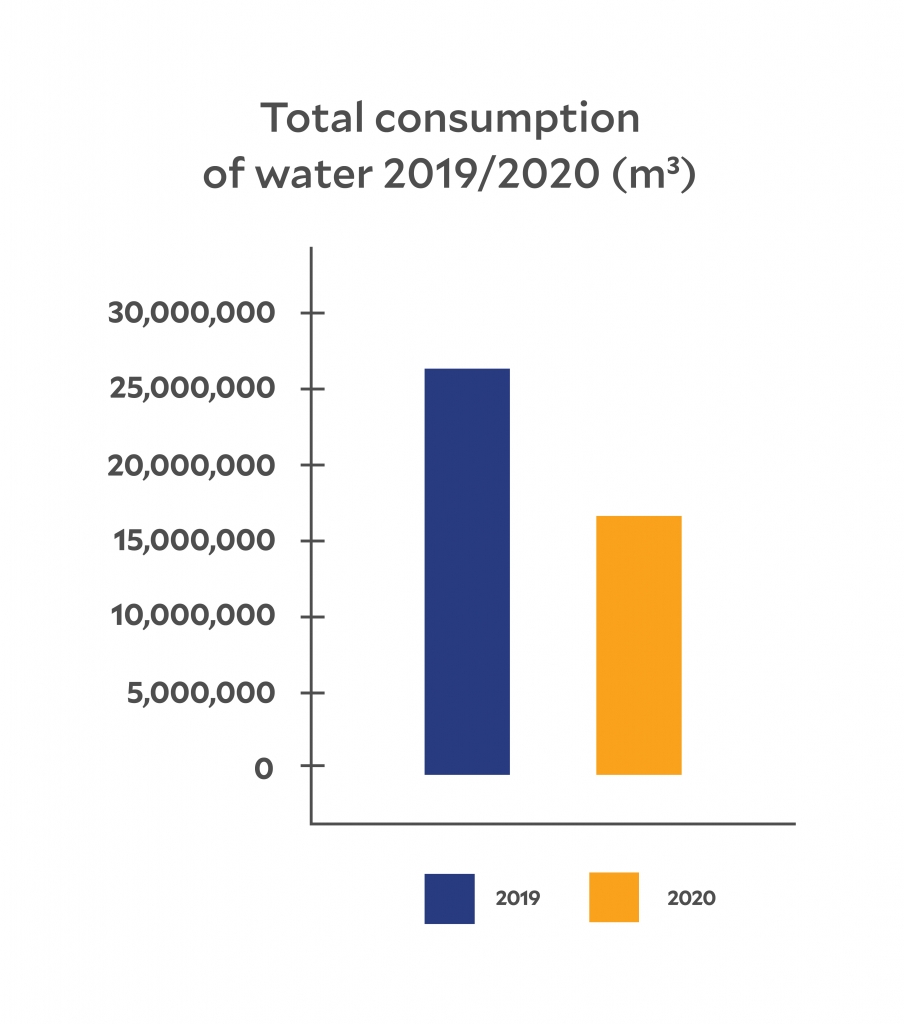 All the factories of the Food Processing Group are equipped with filters for purification of aqueous effluents. The quality of water is controlled four times a year. As a result of the controlled consumption, economical use of water for irrigation of green surfaces, maintenance of technical infrastructure of the facility and a series of regular activities of the department for technical maintenance, DTS realized significant savings in its facilities.

Delta Agrar looks after a wildlife reserve, a pond in Svilojevo, situated on the property Jedinstvo d.o.o. The pond was declared a nature reserve in 2011. It stretches across the area of 150 ha and consists of several ponds and minor 50 ha islands with flora and fauna, the impact on which is not allowed without the authorization of the Republic Institute of Environmental Protection. It is strictly prohibited to cut the island reed and bulrush, capture or kill herons, destroy their nests, reproduction areas and habitats. The said prohibition is prescribed by the Law on Environmental Protection and the Rulebook on protection and declaration of strictly protected species of plants, animals and fungi. The Institute of the Province is in charge of adopting decisions in accordance with the said laws.

Page load link
This site is registered on wpml.org as a development site.
Go to Top